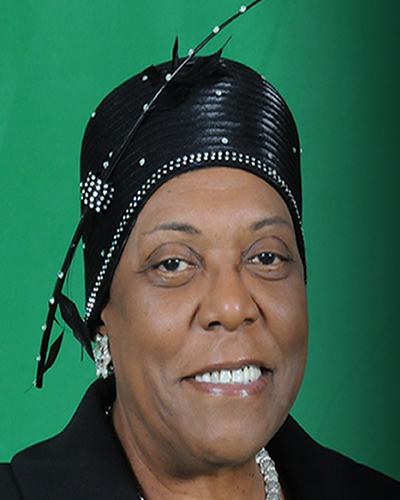 Mother Gladys Lockett Ross relocated back to Houston,Texas in October 2002 to care for her ill mother, Due to the divine leading of the Lord, She placed her life on hold in California and follower God's orders to make this move. She had no idea what other plans had for her future.
In February 2003, she joined the Greater Law Memorial Church Of God In Christ under the leadership of Supt. Willie A. Jenkins, Mother Ross worked faithfully with the Women's Department, serving in may capacities, a member of the Women's Sunday School Department, and chairperson for the Task Force Committee.
In Texas South Jurisdiction, she served under the Supervision of Mother Peggy Carr Lee and Bishop N.H. Henderson. She served with a spirit of excellence in everything she wad asked to do. She was appointed chairperson of State Auxiliaries, Bands, Boards and Units. Then, Missionary Ross was selected to serve as District Missionary for the Northern District with Distinct Superintendent Walter L. Bowie. What a great opportunity and privilege it was to work with a small, dormant district. While there, God used her skills and abilities to work, share experiences she acquired an empower the women of God to reach there God given potentials. As a result, the district grew, souls were blessed. ,and the people Developed a mind to work.
Her loyal devotion to God and support to ministry prepared her for the lofty position as a Jurisdiction Supervisor of Women. To this day, Mother Gladys Ross is thoroughly convinced that God plans our destiny and holds our future in His hands. In December 2007, Mother Ross and son Joshua united with Emmanuel Church family under the leadership of Supt. Hewitt Richardson, Sr. Becoming the Mother of the Church of the Jurisdiction has been the enjoyable and spiritual experience for them.
Because of her dedication to the work of the Lord, Missionary Gladys Lockett Ross was selected to serve as Jurisdictional Supervisor of Women in the new Jurisdiction, Texas Central Metropolitan under the leadership of Bishop Hewitt Richardson, Sr. . She received her appointment from Mother Willie Mae Rivers, General Supervisor Emeritus at the Holy Convocation in Memphis, TN on November 6, 2009.

She currently serves as a member of the Women's International Conventions Special Convention Assistance Committee and on April 13, 2011 in Memphis, Mother Ross was by Mother Willie Mae Rivers to serve on the National Ordination Committee. Also, on the National level, she serves on the Instructor district Missionary Unit, Social Graces Class and was Secretary of the Assistant Jurisdictional supervisor Unit.
Mother Ross is a true servant of God and continues to touch the lives of her own children: Joy, Jasmine and Joshua Ross, her community and the Grand ole' Church Of God In Christ Family.
Recently Mother Ross was named among the 150 Most Influential Women in the Church Of God In Christ with and special feature in the Whole Truth magazine.

Welcome to our website. We want to share the wonderful things that God is doing for our Jurisdictional ministry and encourage you to continue to run the race that God has destined for you. This year has been filled with changes in every area of our lives. God has given us the due diligence to embrace these changes with excitement and expectancy